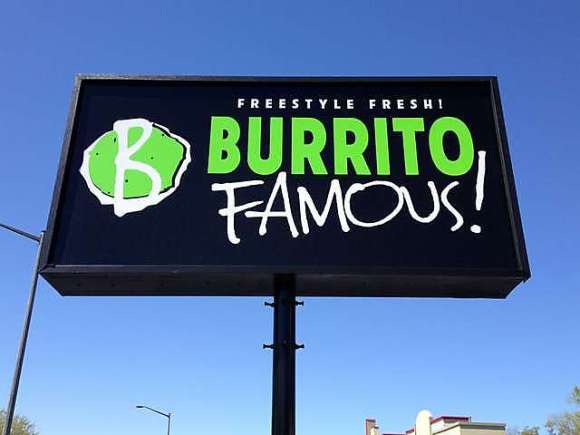 Some things in life are unavoidable.  Death, taxes, and occasional trips to Gainesville are among the less pleasant experiences.  While on business in Hogtown I drove past a brand spanking new burrito joint.   Following my hearing I drove past campus and eventually arrived at Burrito Famous.

The restaurant is located at 3412 W. University Ave.  A large eye catching Burrito Famous sign occupied a small tower at the front of the building.  Its neon green and black provided a visual pop to the light beige building painted with darker beige accents.  Out front was a small patio with several tables.  Shade was provided by two green umbrellas. I parked along the side and made my way to the front door. 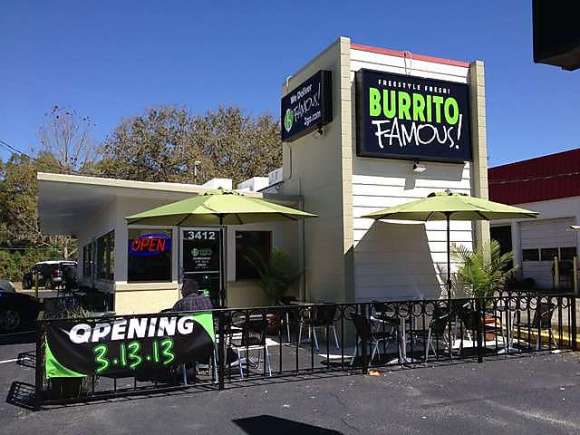 Upon entering I was cheerfully greeted by the owner. Burrito Famous is pressed for space inside.  It is a long narrow space with a few high top round tables at the front.  Corrugate metal rungs along the base of adobe colored walls.  Amber colored cylindrical pendant lights that tapered at each end hung from the ceiling while three menu boards were mounted near the ceiling behind a long counter.

Burrito Famous’ concept is similar to other fast casual burrito shops like Moe’s, Qdoba and Chipotle.  You select an item (burrito, bowl, taco, salad or soup) and then your meat.  Burrito Famous offers four meat choices including carnitas, barbacoa, and baja fish.  They also have one vegetarian option, tempeh. I asked the owner what he recommended and he said the chicken Diablo (slow cooked chicken with tomatoes and chipotle peppers) was his favorite.  I went with his suggestion in a burrito and loaded it up “freestyle” with rice, black beans, cheese, and a medium salsa.  A coke completed my meal.  Service was friendly and moved along well in spite of it being their first lunch service. 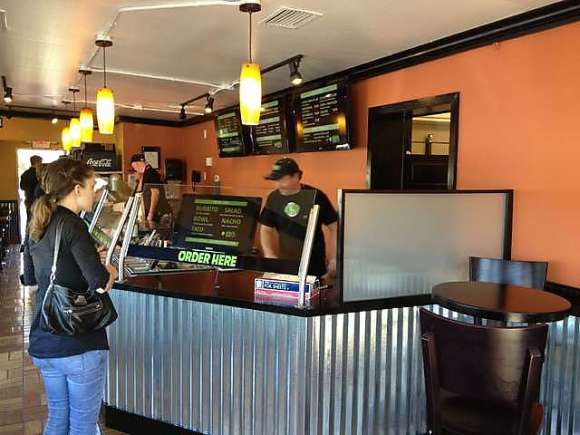 It was a pretty day, so I decided to sit outside.  I was hungry and eyed the aluminum foil clad burrito.  It was served in a blackplastic basket with a side of chips and salsa.  The burrito had some heft to it and I took a bite.  Unlike some places that fill their burritos with rice and beans, Burrito Famous served a sizable portion of chicken.  Eat bite had some along with the salsa and veggies.  It was a very good burrito and fueled me up for the drive back to Tallahassee.

Atmosphere: B+
Taste: B+
Presentation: C
Service: A
Cleanliness: A
Price: $

One thought on “Burrito Famous”