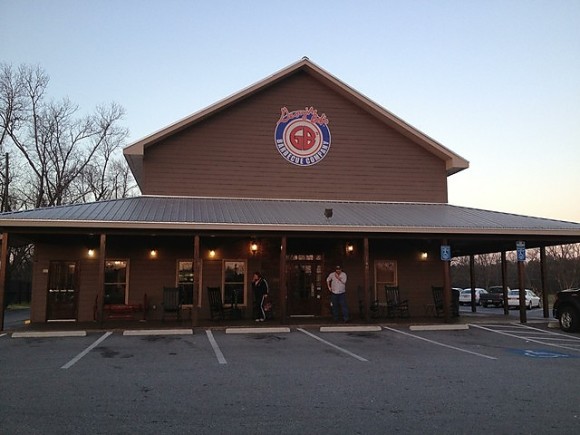 Driving back from Augusta I was wrestled with two competing issues.  On the one hand I wanted to limit highway stops so I could get back home as soon as possible.  On the other hand I needed to eat something before every decent placed closed, and I was forced to eat fast food. A balance was struck as I pulled off Exit 149 on I-75. Byron, Georgia is located just south of Macon, and is home to one of four Georgia Bob’s BBQ Company restaurants.  The other three are located in Warner Robins, Macon, and Milledgeville.

This particular Georgia Bob’s location is housed in a large barn looking building a short hop from the interstate.  The exterior is painted a medium brown color and “BBQ” is written in large letters on the tin roof.  A large Georgia Bob’s logo faced the parking lot that on this particular evening had ample spaces available.  I parked near the front door and made my way towards what I hoped would be some memorable BBQ.

Walking through the front door I made my way towards the counter at the rear of the restaurant.  Behind the cash register a menu board listed the various meats and sides offered.  Chicken, brisket, ribs, and pulled pork were all available along with chicken tenders and corn dogs for the kids.

The cashier said their barbeque sandwich was the most popular item on their menu and happened to be really good.  I took her word for it and ordered one with a side of fries and some sweet tea.  I asked if for the BBQ sauce on the side, and was told they mix all of their pork with sauce. This was disconcerting as slathering ‘que in sauce is usually done to hide less than stellar meat.

I smiled and while I waited for my meal to appear grabbed a cup and filled it with sweet tea.  Unlike most places offering this brown elixir, Georgia Bob’s was on the weak side and could have used more sugar.  Sipping on the sub-par sweet tea I surveyed the restaurant’s interior.  It was very clean and brightly lit by wall lamps and overhead lighting.   Two dining rooms full of booths and tables provided seating.  The walls were decorated with a variety of memorabilia including framed flags, posters, and even a saxophone.  Instead of having an authentic BBQ joint feel it felt contrived.

Before long my sandwich was ready.  The cashier gave me a small container of their spicy BBQ sauce and I was on my way.  I tackled the pork sandwich first and was by a large scoop of pulled pork plopped between two halves of a toasted hamburger bun.  The pork had been thoroughly mixed in the mild BBQ sauce.  The flavor of the meat was masked by the vinegar tomato taste of the sauce and there were no pieces of bark mixed within the stringy pork.  It was a sub-par pork sandwich.

The fries were of the crinkle cut variety and were at least hot.  The best part of the meal was the spicy BBQ sauce which I dipped the fries into.  It was a very nice mix of vinegar, tomato, and just the right amount of heat.  I literally drank the remaining sauce and gave the empty container a swipe with my finger to make sure I got it all.

While their BBQ sauce was good, there are much better pork sandwiches to be had on I-75. Georgia Bob’s is open seven days a week for lunch and dinner. They can be found online at georgiabobs.com, and the Byron location can be contacted directly by telephone at (478) 654-6682.