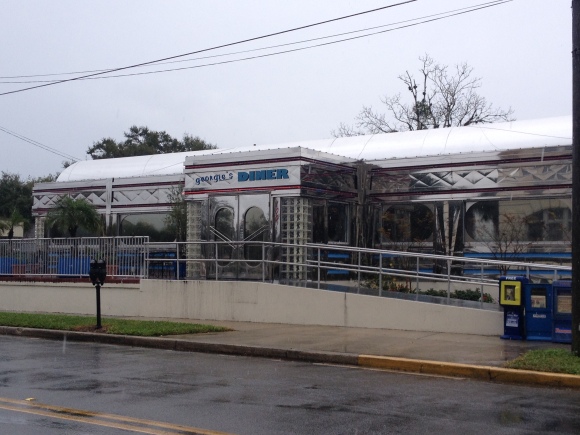 On our last morning in Saint Augustine we decided to meet up with Becky’s niece Sam and her husband David at Georgie’s Diner.  The weather was overcast and grey as we loaded up the car.  A light rain began to fall as we made our way towards the diner for what we hoped would be a delicious ending to our stay in America’s Oldest City.

Georgie’s looks like a classic diner both inside and out.  The exterior is replete with polished metal and neon. The interior is full of chrome, shiny red vinyl, black and white checkered tiles, and more neon.  Sam and David had arrived before us and secured a large corner booth that had more than enough room for our party of six. 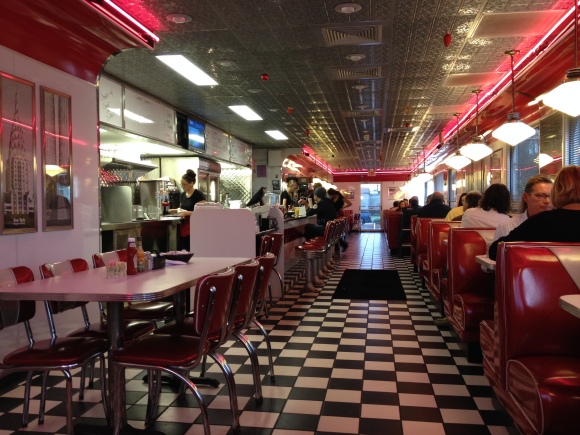 Our waitress appeared moments later and we ordered our drinks.  A steaming cup of coffee arrived a few minutes later in a ceramic mug decorated with ads for local businesses.  As I let the caffeine work into my system I attempted to decide what I wanted to eat.  Mason and Julia were focused on having waffles.  My attention was caught by the Greek Omelet.  I ordered mine with a side of rye toast and home fries.

The diner was packed on Sunday morning and it took a little while for our meals to arrive.  When they did we had to strategically arrange the dishes so we had enough room for all of the breakfast food.  My omelet consisted of fluffy eggs topped with a sprinkling of feta cheese and chock full of large chunks of gyro meat.  It was delicious and filing.  The home fries were nicely seasoned and the toast was served hot. 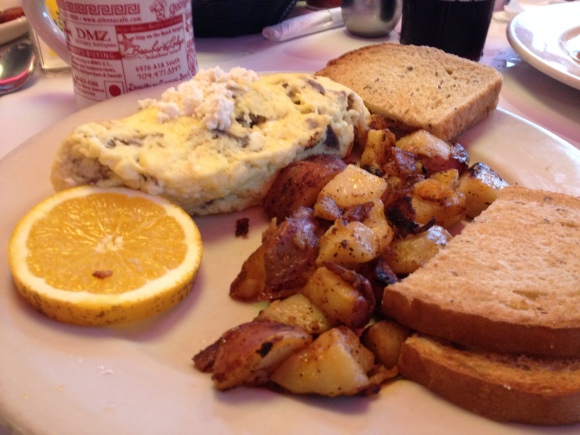 The kids enjoyed their waffles.  David ordered the same thing and opted for a side of cherries to top his meal.  He happily poured them over his waffles and devoured them while Miss Julia helped Sam eat the rest of her grits and bacon.

Our breakfast at Georgie’s hit the spot.  The restaurant was clean, the service attentive, and the food was well prepared.  It also made me wish we had a classic diner in Tallahassee.  Georgie’s is located at 100 Malaga Street.  The diner is open for breakfast, lunch, and dinner seven days a week.  Georgie’s can be found online at thealcazarcafe.com/georgies-diner/ and contacted by telephone at (904) 819-9006.

Sweet Tea & Bourbon’s Rating:
Atmosphere: A
Taste: A
Presentation: B
Service: A
Cleanliness: A
Price: $