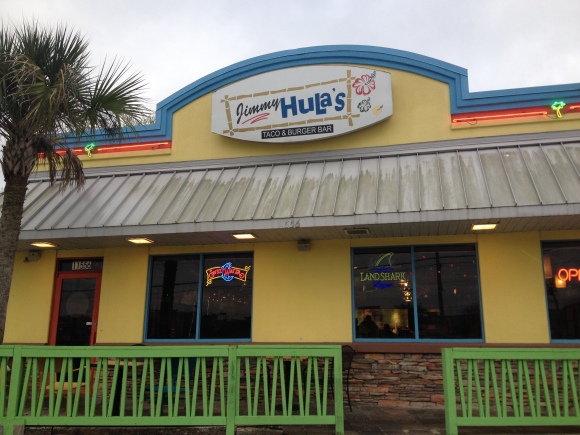 While Becky and the Chiles H.S. Mock Trial team were arguing opposing schools into submission high atop the Orange County Courthouse, I decided to take Mason and Miss Julia to a UCF Baseball game.  Before watching the Knights take on the Central Michigan Chippewas we decided to eat dinner near campus.

On the trek across Orlando on East Colonial Drive from the hotel to the UCF side of town we passed numerous restaurants, countless red lights and a small airport. The kids were excited about the prospect of dinner and seeing a baseball game, and Mason kept asking if I would be able to catch a foul ball for him. 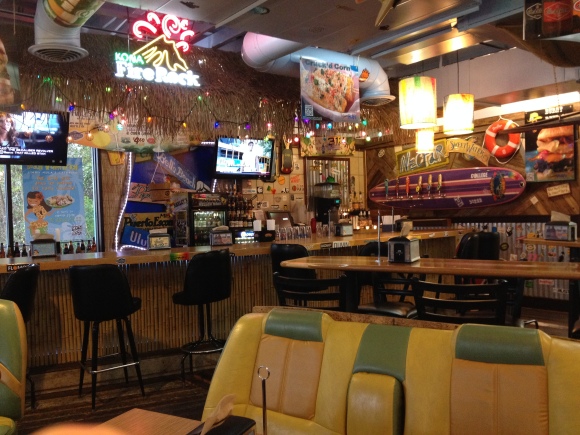 The main drag near campus, University Boulevard, was lined with apartment complexes and numerous restaurants. Following a quick search for good eats in the area we pulled into Jimmy Hula’s. The restaurant is a small Orlando chain with three locations that specializes in fish tacos and burgers served up in a surf shack atmosphere.  Mason and Miss Julia gave their approval when they heard the word tacos.

The kids hopped out of the car and ran into the eatery.  Surfboards hung from the ceiling, a tiki-inspired bar filled one corner of the restaurant, and seating was provided by booths that appeared to use vinyl covered seats from old time automobiles.  Neon beer signs, and flat screen televisions peppered the walls while light fixtures that would be at home in the 1960s hung from above. It was a cool place with a fun vibe.

I approached the counter while attempting to herd the kids and was handed a plastic covered menu.  Fish tacos, sandwiches, burgers and items for little dudes are all offered by Jimmy Hula’s.  I ordered a Malibu and Voodoo fish taco.  Mason wanted fish nuggets with a side of fries and pineapple chunks, while Miss Julia ordered a beef taco.

We took a seat at a high top and slid our order number into the metal holder.  Mason and Miss Julia wanted to sit in the fun car-inspired seat while I watched them from across the table.  They attempted to play a game on my iPhone which resulted in squabbling and a brief lecture on sharing.

Following a reasonable wait our meals were brought to the table by the same smiling waitress who took our order.  Each of the three meals was served in simple plastic baskets.  The Malibu arrived nestled next to a pile of chips.  Inside the soft flour tortilla guacamole, Jack cheese, salsa, and lettuce covered pieces of fish.  The taco was topped with a flourish of sour cream.  The combination of all the ingredients worked really well together and complimented the mildly flavored fish.  The Voodoo taco consisted of crispy fish, lettuce, pineapple, mango salsa, and Voodoo sauce.  This taco was heavy on fruit flavors and I detected a slight amount of heat from the Voodoo sauce.  Both tacos were very tasty, but if I had to pick a favorite I would give a slight edge to the Voodoo.