I tend to be a streaky eater.  Sometimes its sandwiches, tacos, and believe it or not even salads. I am currently in a hot dog streak, and on a dreary Tallahassee afternoon I stopped at Five Guys Burgers and Fries for a hot dog.  You read that right, I was on mission for a grilled hot dog instead of one of their deliciously messy burgers.

Five Guys has two Tallahassee, Florida locations.  The one situated at 1872 Thomasville Road in the Capital Plaze was the city’s first.  Parking during the lunch rush can be a challenge, but I easily found a space die to less than optimal weather and an 11:45 arrival time.

A light rain drizzled as I made my way inside and before opening the door I stamped my feet on the textured cement sidewalk.  Five Guy’s interior was bright, clean, and started to fill with customers as midday approached.  I strolled up to the smiling cashier and glanced over the menu before ordering a hot dog, small French fry, and a drink.

As I waited for my lone hot dog to grill I snacked on roasted peanuts, watched the cook slap burger patties onto the stainless steel flattop, and drop multiple baskets of fries.  Minutes ticked by until the hot dog was slid into a bun, topped with mustard, relish, onion, and slid into a paper bag.  The small fry, which overflowed from its cardboard container went in next, along with two extra scoops of fries. 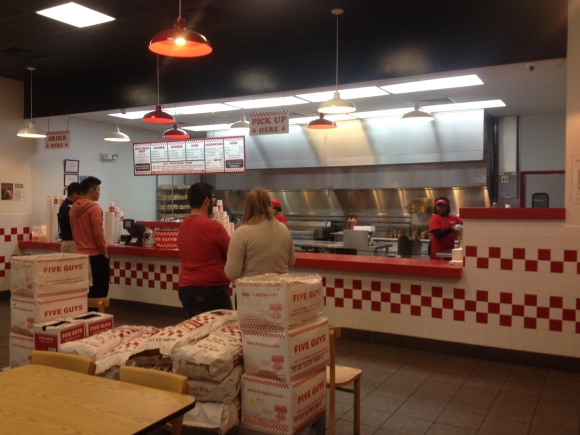 Grease spots dotted the brown paper bag.  It crinkled softly as I took it from the girl’s hand.  The smell of French fries and hot dog mixed together and drifted from the bag.  I topped off my coke and took a seat in a wooden chair at a small table. Dated reviews announcing Five Guys as the best burgers in various cities lined the wall.  Any mention of their hot dog was conspicuously missing.

I peeled open the bag.  The French fries, which moments before had been swimming in oil, were piping hot and salty.  I tunneled through their potato goodness for the hot dog.  It was wrapped in foil and juices dripped from the fold.  I opened it up and was greeted by a large Kosher style hot dog.  The bun and dog glistened.  I took a bit and an onion feel out.  The bun was soft while the split and grilled hot dog had a nice snap.  The part that had been exposed was slightly crisp. Paired with a cold drink, it was a tasty meal.

Five Guy’s Capital Plaza location is open seven days a week from 11:00 a.m. until 10:00 p.m.  For those brave souls who want to know how many calories are in their delicious fries, Five Guys has bagfuls of additional information fiveguys.com and Facebook.  The Capital Plaza location can also be contacted by telephone at (850) 597-7514.