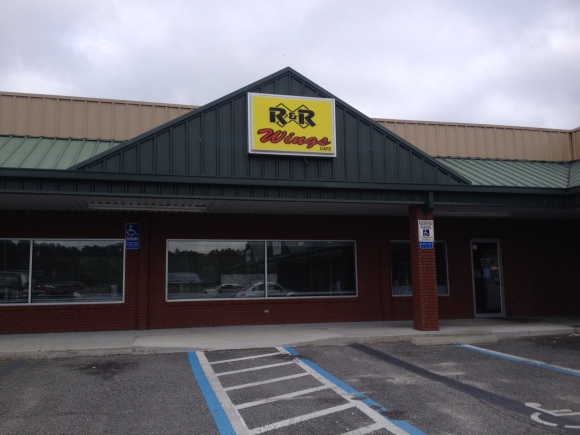 I made a detour on my way back from Jacksonville to pick up a bike Becky bought from a friend, and soon found myself in Nassau County.  Pulling into her daddy’s yard I waited for her Uncle Mike to arrive and open the garage.  Minutes later Cadillac Man drove up in a red pick-up truck. After loading a retro styled bike into the back of my SUV he finished off half of a beer and sped off.  Before leaving Hilliard I called Becky’s Uncle Jerry to see about meeting up  for lunch.  He agreed, and we decided to eat at R & R Wings Cafe, a local place that serves burgers, wings, and seafood.  I arrived a few minutes after noon and parked in front of the brick clad building.  A bright yellow sign stood against a green metal gable.  Pick-up trucks filled the lot and a small group of men stood near the front door, two smoking cigarettes.

I walked around them and through a double set of glass door rimmed with silver metal.  A girl in a black t-shirt and black hat stood behind a cash register.  She looked up when the door opened, gave me a warm greeting, and told me to take a seat wherever I liked.  I selected a booth towards the rear of the restaurant.  The benches were clad in black vinyl.  A roll of paper towels, mustard, and ketchup bottles occupied the middle of the table.  Behind me a small bar area was deserted.

A waitress came and slid two plastic covered menus onto the table.  She took my drink order, and by the time she returned Jerry had taken the seat across from me.  A generally happy person, we chatted about my father-in-law, his granddaughter’s successes at Jacksonville University, and how my family was doing.  While we caught up we both looked over the menu.  Jerry wanted a cheeseburger while I as usual had trouble deciding what to order.  I usually go with wings at a wing place, but did not feel like possible indigestion of the ride back to Monticello.  Ultimately I decided to order the fried oyster basket with a baked potato and side of broccoli.

Following a short wait two white and blue checkered clad baskets arrived.  Jerry’s was filled with a burger and what appeared to be previously frozen French fries.  He ate with gusto, made short work of the burger, and gave it a thumbs up.  My basket was filled with about a dozen fried oysters, a whole baked potato, and a small bowl of steamed broccoli.  The oysters were moderately breaded and had a nice flavor.  The potato was fluffy and I topped it with sour cream, salt and pepper.  As for the broccoli, it was bright green, and served with a slight crunch (which I appreciated.)