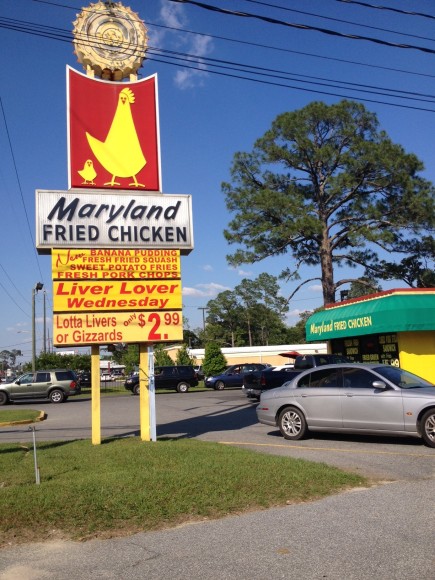 Sitting on a hard bench at the Thomasville Cultural Center waiting for Miss Julia to be finished with her ballet lesson I thought about what to feed our little minions for dinner. I was exhausted, so cooking was out of the picture.  Chinese did not move the needle, and we had just eaten pizza.  I asked Mason if he wanted fried chicken, and he gave me a thumbs up.  When the class ended, I collected the elusive Miss Julia and made the short drive to Maryland Fried Chicken.

Keeping the kids out of the way of cars exiting the drive-thru we squeezed through a snug spot between two parked cars and entered the restaurant.  For the amount of cars parked out front the inside of the store was practically empty.  Two clerks in red visors chatted behind the counter towards the back of the store, while a solitary man sat at a table waiting for his order.

Maryland Fried Chicken restaurants are an odd bird.  Franchisees purchase certain items from a central location, but for the most part are left to their own devices.  The Thomasville store in addition to serving fried chicken and hot wings serves up BBQ (pork and ribs), fish sandwiches, gizzards, and livers.  I decided to stick to what they hopefully did best, and ordered two chicken finger boxes for the kids, a two piece white meal for the wife, and a three piece mixed meal for my dinner.

While sipping on sweet tea I spotted a really cool old print on the wall which had a picture of the Constantine family and listed all of Maryland Fried Chicken’s locations throughout the United States.  I tried to snap a picture, but the overhead fluorescent lighting, and the glare off the picture frame produced a terrible shot.   I wonder how many of the locations on that map are still open.

All of Maryland Fried Chicken’s meals are cooked to order, which meant we had a few minutes to kill.  I kept the kids entertained with Endless ABCs and once our order was bagged we were on our way back to the ‘Cello.

Each of the meals came in a retro style cardboard box with a old school version of the Maryland Fried Chicken logo on top.  The kids chicken fingers were handmade (not from a bag), and the honey mustard sauce which accompanied their meals was great.

I opened my box and was greeted with a breast, thigh, and drumstick.  Each piece of chicken was crispy on the outside and moist on the inside.  The breading also had a nice amount of seasoning without being too salty.  The French fries were a standard issue crinkle cut variety.  The roll was soft.  The only disappointment was the slaw, which was flavorless.

Maryland Fried Chicken is located at 1310 E. Jackson Street.  The restaurant is open Monday through Saturday 9 am – 9 pm, and on Sunday from 9 am – 8 pm.  Maryland Fried Chicken’s Thomasville location can be found on Facebook, although the page is not actively updated, and contacted by telephone at (229) 226-9592.

Sweet Tea & Bourbon’s Rating:
Atmosphere: B
Taste: A
Presentation: B
Service: A
Cleanliness: A
Price: $