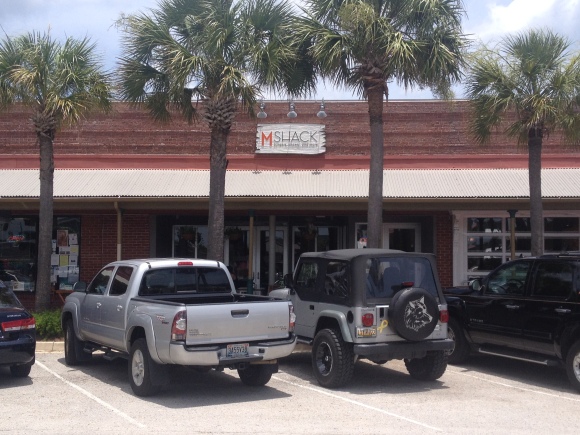 During a recent joint inspection the conversation invariably turned to food and quickly evolved into a best of Jacksonville discussion. M Shack was trumpeted as having one of the best burgers in Duval County so I did some digging to see where it was located. Turns out it was less than a 10 minute drive from the lab, and when my day concluded I made my ways towards Atlantic Beach.

Parking at the height of the lunch rush was a nightmare.  All of the on street parking was taken and I had to stalk a pair of old ladies in the parking lot across from the restaurant.  A rushed goodbye later I took one of their spots and hustled across the blistering black tops and into M Shack.

A line snaked back from the cash register and I used the time to sort though the menu.  M Shack burgers range from the relatively tame to the outlandish.  Single burgers, doubles pressed between two grilled cheese sandwiches, and even one topped with foi gras are available.  I decided to keep things simple and opted for the M Burger cooked medium rare ($5.50) and a side of house French fries ($2.50).  I was given a number, filled my cup with coke, and took a place at the bar.

A large flat screen hung behind the bar.  Several craft beers were available and I jealously watched a guy next to me sip on a frosty pint.  A line of tables filled the space between two sets of sage green booths.  Menus written on chalk boards ringed the dining area and a large American flag hung from the ceiling near the back.  It was comfortable and urban.

The burger and fries arrived in two cardboard trays.  Melted American cheese enveloped the patty.  Tomato, lettuce, and several dill pickle slices occupies the adjacent bun.  I applied ketchup to the top of the burger and took a bite.  The meat was juicy, flavorful, and cooked just as I had ordered.  The bun was fresh, and the toppings were fresh.  It was a very good burger that highlighted the quality of the ingredients used by M Shack.  The French fries were hot, salty, and crispy.  They were not up to the standard of other boutique burger joints, but were passable.  I wanted to try a shake, but by the time the burger and fries were eaten I had no room left.

Service was friendly and fast during my visit, and the restaurant was very well kept.  M Shack is located at 299 Atlantic Blvd, Atlantic Beach, Florida and is open seven days a week from 11 a.m. until 10 p.m.  The restaurant can be found online at mshackburgers.com, Facebook, and contacted by telephone at (904) 241-2599.

Sweet Tea & Bourbon’s Rating:
Atmosphere: B+
Taste: B
Presentation: B+
Service: A
Cleanliness: A
Price: $