We spent the 4th of July in Hilliard, Florida.  Following a day of full of great people, good food, cold beverages, and fire works we crashed. The following morning none of us were in the mood to cook, and instead we made the short drive down US 1 to the Steamboat Lilly’s.  Like many other God fearing red-blooded American businesses the restaurant was closed for the holiday weekend.  Our only remaining option in town for breakfast was the Hilliard House.

The Hilliard House is located at 551876 U.S. Hwy 1 in a brick building that was previously home to a seafood restaurant.  We pulled into the parking lot and chose a space towards the end.  As we walked towards the restaurant Becky’s lovable Uncle Mike, aka Cadillac Man, cautioned that the reviews of this particular local eatery were less than glowing.  Undeterred we opened the glass doors and strolled into the foyer area.  We were immediately greeted by a hostess who seated us at a large booth.

A waitress approached the table and in a voice that sounded like she favored Lucky Strikes, said hello and disbursed plastic clad menus.  As she took our drink order she rattled off some specials and noted the breakfast buffet was still open.  Becky and the kids jumped at the opportunity to eat endless sausages and silver dollar pancakes.  I ordered a cheese omelette with ham.  Cadillac Man asked for a cup of coffee.  While my family went to inspect the buffet I sipped my coffee, waited for my meal to arrive, and took in my surroundings.

It was a fittingly patriotic place to eat during the July 4th weekend. Pictures of veterans from Hilliard lined the restaurant’s walls along with flags from the various branches of the armed forces.  It was interesting to look at all of the pictures of the men who bravely served our country in a time of need. 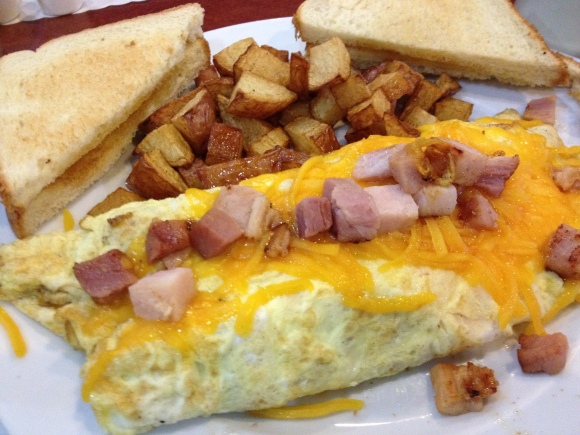 My omelette arrived a short time after the kids and Becky had returned with their plates.  Three eggs had been beaten and cooked to fluffy perfection.  Melted cheese and chopped ham filled the omelette.  More chopped hame and cheddar cheese was sprinkled on top.  Buttered toast and home fries completed the meal.  The omelette was nicely prepared and nicely cooked without being over done.  The home fries were crisp on the outside and really hit the spot.  My meal was very tasty, and hard to beat at $5.75.  The rest of the family enjoyed the breakfast buffet and even Cadillac Man said they made a good cup of coffee.  Service was also attentive and friendly.

The Hilliard House is open seven days a week from 6 a.m. until 9 p.m.  The restuarant can be found online at thehilliardhouse.com, Facebook, Twitter @MyHilliardHouse, and contacted by telephone at (904) 845-2231.

Sweet Tea & Bourbon’s Rating:
Atmosphere: B
Taste: A
Presentation: B+
Service: A
Cleanliness: A
Price: $

3 thoughts on “The Hilliard House”