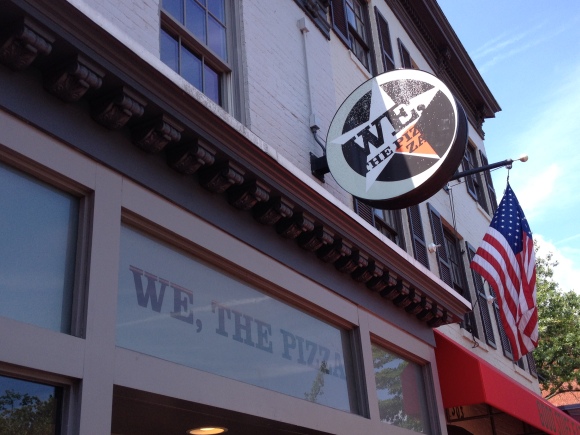 With a tour of the Capitol scheduled for early afternoon we decided to eat lunch on the Hill. A short cab ride deposited us at 305 Pennsylvania Ave, SE in front of We, the Pizza. Staffers and other businessmen zipped into the shop and emerged with a slice of pizza.

Mason and Miss Julia, who adore pizza ran, were excited about lunch and ran towards the front door. I opened the door and the bounded in towards the pizzas set out on wooden stands behind a large piece of glass. More than a dozen varieties of pizza with every imaginable topping were available for purchase by the slice or full pie.

Unsurprisingly the kids both stated they wanted pepperoni. I opted for a slice of buffalo chicken, while Becky ordered For the Greek in Us. A slab of Sicilian style pizza, a couple of cokes, and a beer for daddy completed our order. Service was quick, if disinterested, and upon paying I was handed a pager which would flash red when our order was ready.

We took a seat outside and watched people quickly walk by the restaurant with purpose. Day drinking is always fun, and the New Belgium Shift I ordered hit the spot. A red circle of LED lights glowed on the square black pager and I went inside to retrieve our order. The slices were served on paper covered black plastic plates. I felt a piece to make sure it was warm and found it to be smoking hot.

I slid the kids’ slices in front of them and they tore into them like Scout and Amber devoured salmon in the movie Bears. Becky and I were more restrained in our consumption of the pizza, but not by much. The buffalo chicken slice was loaded with chunks of white meat chicken and then topped with streams of ranch dressing and buffalo sauce. Each bite had a bit of heat, a touch of coolness, and a whole lot of deliciousness. The crust also had a nice bit of chew.

For the Greek in Us was topped with kalamata olives, feta cheese, and large pieces of tomatoes. Becky approved of its flavor and gave it two thumbs up. We split the Sicilian slice which had a thick crust and was covered in mozzarella, and large piece of tomatoes. The inside was chewy and the toppings all had good flavors.

The pizza from We, the Pizza was delicious and everyone was full and happy by the time we departed. The restaurant is open Monday through Saturday from 11:00 am – 11:00 pm. For more information visit We, the Pizza online at wethepizza.com and Facebook. The Capitol Hill location can also be contacted by telephone at (202) 544-4008.