Whether or not a couple can travel together is a deal breaker.   Kirsten and I decided to test these waters early with a spur of the moment weekend trip to Montgomery, AL.  The drive to Alabama’s capital through small towns and expanses of farmland was accompanied by various flavors of Laffy Taffy, ice cold coke zeros, several specially prepared mix-tapes, and continuous conversation.  It was a glorious and memorable four hour ride.

Following an afternoon of exploring downtown,  we arrived at Central for dinner.  The restaurant is housed in a repurposed building near the city’s minor league baseball park, where the Montgomery Biscuits knead and butter their competition. Large mirrors lined the exposed brick walls, and lantern-like fixtures were suspended from the ceiling.  A large bar towards the rear of the restaurant was crowded with patrons sipping cocktails. 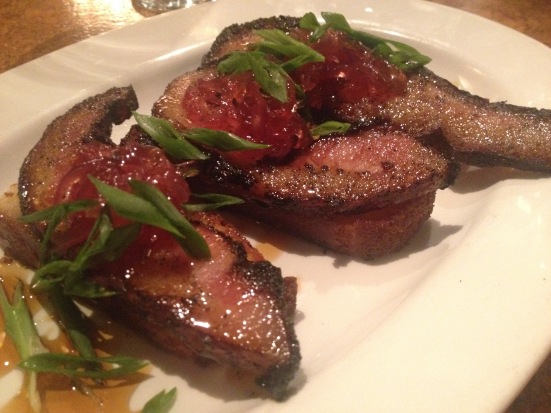 The hostess seated us at a table in view of be open kitchen, and we were immediately greeted by our smiling waitress.  She was very friendly, and by the end of our introductory conversation, we had our drinks and knew her entire life story.  As we sipped on our libations, Kirsten and I looked over the menu.

Central is a modern American restaurant that focuses on seasonal local ingredients and offers a wide range of snacks (small dishes), starters, and main courses.  I selected pork jowl bacon and sweet corn bread as a starter, with fried catfish and hopping john for my entrée.  Kirsten opted for oven roasted chicken with a side of Brussels sprouts. 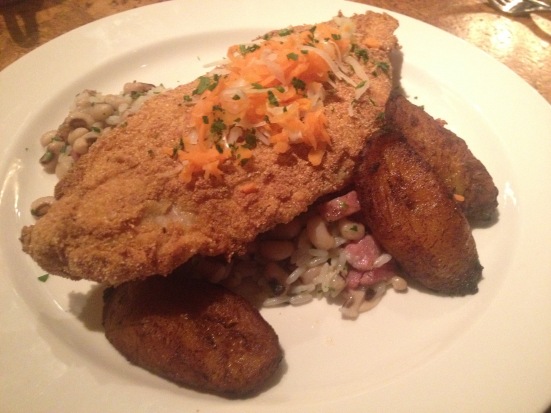 The pork jowl bacon appetizer was delicious.  Thick cut slabs of bacon were served on top of slices of homemade corn bread topped with a pepper jelly and dusted with green onions.  The smokiness of the bacon paired with the sweetness of the cornbread was perfect.  Kirsten, not being a fan of un-rendered bacon fat, stuck mostly to the cornbread and pepper jelly portions of the plate, which she declared were delicious.

Dinner progressed at a leisurely pace, and after the starter was cleared, our main dishes arrived.  A hill of hopping john was flanked by thick cut slices of fried plantains and topped with a large fried catfish fillet.  The catfish was crispy on the outside, and flakey and moist on the inside.  The hopping john was chock full of black eyed peas and pieces of smoked sausage, while the plantains provided a sweet contrast to the rest of the meal. 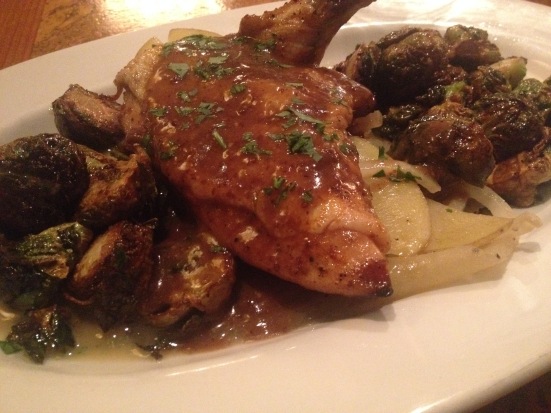 When Kirsten ordered roasted chicken, I initially questioned her selection, actually I more than questioned her decision. (There was an excessive amount of judgment involved which in retrospect was ridiculous since I ordered catfish.) Regardless, after seeing the dish that arrived on the table, however, I had a serious case of food envy.  My feelings only grew when I was allowed to taste her food.  The chicken breast was perfectly cooked, and topped with a savory sauce. Lyonnaise potatoes topped with butter and served with onions sat under the chicken and were delectable.  The star of the plate, however, was the Brussels sprouts which were roasted and then flash fried and tossed with a vinaigrette that lent a touch of sweet and a touch of tang.  The outer leaves were crisp, while the centers were tender.  I could have eaten a bowl of them, and was happy she willingly shared her meal with me.

Our dinner at Central was wonderful.  We closed our first night in Montgomery with a 2 hour search for ice cream, and then watched a fireworks show from the side of the road.  From start to finish, it was a magical evening.

Central is located at 129 Coosa Street, Montgomery, AL.  The restaurant is open for lunch Monday through Friday 11 am to 2 pm and for dinner Monday through Thursday 5:30 to 10 pm and Friday and Saturday nights from 5:30 until 11pm.  Central can be found online at www.central129coosa.com and on Facebook.  For reservations and additional information the restaurant can be contacted at (334) 517-1155..

Sweet Tea & Bourbon’s Rating:
Atmosphere: A
Taste: A
Presentation: A
Service: A
Cleanliness: A
Price: $$$

One thought on “Central”