With the complimentary hotel breakfast in the rear view mirror I cruised around downtown Clewiston looking for a place to eat lunch.  Seeing nothing of interest on my way towards Lake Okeechobee I turned around and headed west.  A small sign advertising Cuban cuisine caught my eye and I pulled into a small parking lot that served both a convenience store and Julio’s Café Tropical.

Above the door a small rectangular sign hung. I opened the door and a small group of their diners looked up from their meals.  Not giving me a second look they went back to chatting and eating.  A sandwich counter ran along the right side.  A storage area for bread topped by a sandwich press was attached to the counter.  A small window leading into the kitchen provided glimpses of workers scurrying about as they assembled lunch platters.  Four wood slatted booths lined the other side of the pale yellow and white dining area with the space in between occupied by simple tables and chairs. 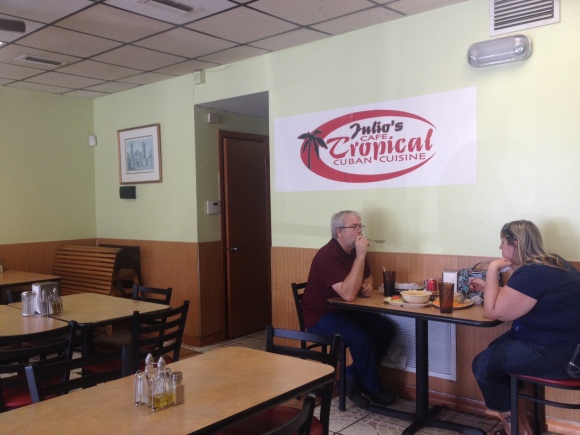 I took a seat on a stool and was greeted in Spanish by a woman from behind the counter.  I nodded and was handed a plastic clad menu while she cleaned crumbs off the aged Formica with a white rag.  Working my way through the menu I smile crept onto my face when I saw Café Tropical served Masitas de Puerco.  The meal came with a small salad, yucca, black beans, rice and bread for less than $8.00.  I also asked for a Cuban sandwich to go to ward off hunger on my way back north.

I sipped on a coke while waiting for my meal.  A short time later it arrived on two oval plastic platters.  The first was piled with four large pieces of fried pork and a small salad of lettuce and tomato.  The second contained a heap of rice, a large piece of yucca, and a cup of black beans.  A small basket of fresh bread from Jaguey Bakery of Miami was slid next to the pork.

Picking up my fork I aimed for a golden piece of pork and took a bite. The pork had been marinated in mojo and packed a complex flavor that included garlic and citrus notes.  The interior was juicy while the exterior of each piece of pork was nicely seared. The yucca had also been marinated and was delicious.  The black beans were some of the best I had ever eaten and I scrapped the bowl clean.  As I cleaned my plate a waitress passed by and asked how the food was, without one bit of hyperbole, I told her it was amazing.

While I finished my lunch I watched a girl press my Cuban sandwich.  After paying my check, I was handed a warm white paper bag.  On the 380 mile journey back to the Florida Panhandle my hunger was held in check until Gainesville.  With one hand on the wheel, I unwrapped half of the sandwich (sorry for the lousy picture).  The Cuban bread was crusty on the outside and chewy on the inside.  Slices of roast pork, ham, and Swiss cheese were layered on top of one another.  Dill pickles were included in the sandwich, but yellow mustard was relegated to the sidelines.  The sandwich did not need it, as the juices from the pork and pickles mixed with one another to provide ample moistness.

Café Tropical went two for two as both their Masitas de Puerco and Cuban sandwich were homeruns.  The restaurant is located at 307 E. Sugarland Hwy, Clewiston, Florida.  For more information, including their hours of operation, Café Tropical can be contacted by telephone at (863) 983-0049.